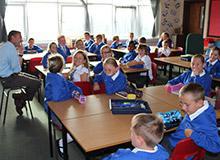 Talbot Primary School first opened in January 1969 to cater for 371 children between the ages of 5 and 11. The school community even included two donkeys, Pebble and Dash, who lived in the school grounds and were cared for by the children!

The school has fantastic facilities, including a self-contained band room and purpose-built sports changing rooms. Indeed there has been a strong emphasis on both music and sport at Talbot since the school opened, with many superb musical productions being staged over the years and talented sports people. 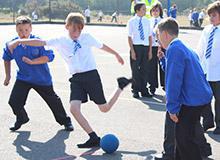 There are over 5 acres of playing field space, to be utilised for both sports and outdoor learning, alongside a large playground and tennis courts. It is also close to Talbot Heath; an urban heath that is home to a variety of rare wildlife.

“Leaders, including governors have successfully driven improvements in achievement and maintained a good quality of teaching ”